“Greek & Wicked” is an experiment like “Tuper Tario Tros.” was, so not a big game.

When we started working on it, Guillaume was playing a game that was the perfect modern and AAA game reference we needed : God of War.

We had difficulties to finish this game, and in the same time daily news were (and still are) really hard too. We thought the fight of our little greek character against an invincible hydra was really close to modern fights. That’s why William integrated a little scenario connected to recent european events. 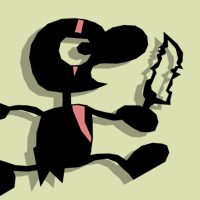 Display all blog posts about Greek And Wicked